Federal Health Minister Ginette Petitpas Taylor visited U of T cognitive neuroscientist Gillian Einstein’s lab to learn more about her groundbreaking research into how sex and gender influence the structure and function of the brain.

Einstein — the inaugural holder of the Wilfred and Joyce Posluns Chair in Women’s Brain Health and Aging — is an associate professor in the Department of Psychology in the Faculty of Arts & Science and the Dalla Lana School of Public Health.

“We are honoured that she came,” says Einstein. “It’s very gratifying that she is concerned about the important issue of women’s brain health and showed this interest in our work.”

Einstein and David Cameron, dean of the Faculty of Arts & Science, greeted the minister and joined Lynn Posluns, founder and president of the Women’s Brain Health Initiative and Yves Joanette, scientific director of the Canadian Institutes of Health Research’s Institute of Aging for a tour of the lab and an overview of her research.

Einstein’s team aims to understand how brain health, memory and aging are influenced by sex and gender.

Her research centers on a key question in brain health: Why do significantly more women than men suffer from dementia and Alzheimer’s disease? Although women statistically live longer, she believes that hormones, namely estrogens, may play a major role in long term brain health.

Supported by $1 million over five years from the Posluns Chair, Einstein’s team is currently studying memory and brain changes in women who have had their ovaries removed before reaching natural menopause, a group that experiences higher incidences of dementia. The particular women in her study are women with a mutation of the BRCA1/2 genes who have their ovaries removed as preventive treatment for the high risk of cancer. 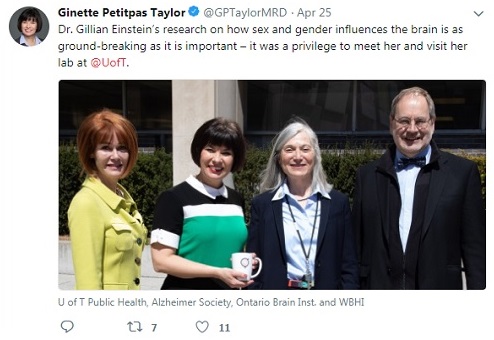 “Understanding changes that occur over time will give us a better idea of what the window of opportunity is for intervention with potential therapies,” says Einstein. “This first-of-its-kind study is crucial for understanding women’s brain health in general, as it’s giving us important information about the role of estrogen early in life.”

Petitpas Taylor’s visit concluded with a stop at the Toronto Neuroimaging Facility (ToNI), located next to Einstein’s lab, which houses the only MRI scanner at U of T outside of affiliated hospitals. ToNI is a shared research center, dedicated to research and teaching in human neuroimaging at U of T, run by the Department of Psychology. The MRI has been an invaluable asset for Einstein’s research, allowing the team to understand structural differences between participants’ brains and those of women with intact ovaries.