Professors Jonathan Abbatt, Jennifer Murphy and Tovi Grossman are among many Canadian scientists celebrated today by the Natural Sciences and Engineering Research Council of Canada with the announcement of the agency’s annual NSERC Prizes.

Three Faculty of Arts & Science researchers are among many Canadian scientists celebrated today by the Natural Sciences and Engineering Research Council of Canada (NSERC) with the announcement of the agency’s annual NSERC Prizes. 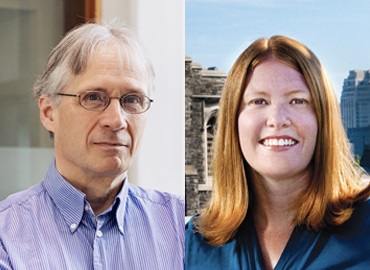 The Brockhouse Canada Prize for Interdisciplinary Research in Science and Engineering was awarded to the U of T-based NETCARE project for its contribution to climate research in Canada’s Arctic. NETCARE — the Network on Climate and Aerosols — was established in 2013 with the goal of understanding how aerosol particles are formed and travel through the atmosphere, and the effects they have on climate.

The team distills massive amounts of field data and observations to improve climate models that predict environmental changes that are likely to take place in the Arctic over the coming decades. These predictions help policymakers prepare for and, hopefully, mitigate the worst of the effects of climate change in the Arctic.

Tovi Grossman, an assistant professor in the Department of Computer Science, is the recipient of an E.W.R. Steacie Memorial Fellowship, which recognizes early career achievements of promising scientists and supports their efforts to enhance their research capacity. The award celebrates Grossman’s investigations into human-computer interaction, automation and the ways in which people engage with new technologies.

Grossman and his colleagues have found that allowing computers to handle some aspects of a task can free people to focus on other details and acquire new skills. He leads a team that is developing technologies that balance the precision of computers with the creativity and ingenuity of humans.

Some of their developments include AI-assisted drone navigation that handles fine-tuned steering in tight spaces, while an operator focuses on speed and direction; wearable sensors that capture the intricate movements behind grip and touch, so hands can perform nimble tasks in virtual environments; and software interfaces that encourage users to try tools and menu items to advance their expertise more quickly.

Recipients of all of this year’s NSERC Prizes will be celebrated at a ceremony beginning at 1:30 pm EST and streamed live on Facebook and YouTube.